Denise Jaeckel lives in Indiana and graduated from IU Bloomington with a degree in Telecommunications.  She is a professional actress and member of the Screen Actors Guild (SAG) and the American Federation of Television and Radio Artists (AFTRA).

Kathy Byrne is the Director of TV/Theatrical Contracts at Chicago SAG/AFTRA. Previously she worked for the Chicago Film Commission.

Kathy and Denise will be discussing casting, talent agents, film contracts and anything else you want to know about hiring actors for your productions.

IFN Meetings are open to the public and we encourage anyone interested in filmmaking to join us for an evening of learning and networking.

The meeting will be at our usual place and time: 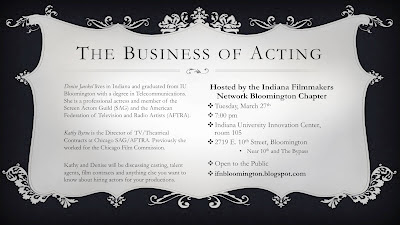 Posted by Chris Eller at 10:05 AM No comments: Links to this post